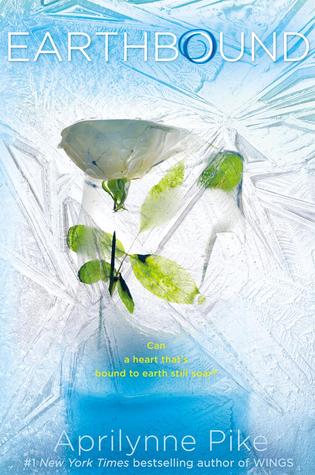 Critical Rating: 2 out of 5 stars

Entertainment Rating: 1 out of 5 stars

I’d like to quickly thank the author for kindly sending me a copy of her book! This doesn’t influence my review in any way.

Hello bookworms and welcome back! This review is quite a few days overdue, so my apologies. Life has been a little bit busy and hectic and I’ve hardly been home long enough to do anything but sleep and eat! But luckily, I’ve managed to put some time aside to write this review of Earthbound by Aprilynne Pike. I’d never heard of this book or the author until I was contacted by her through Twitter and I was offered a copy of her book, which I gladly accepted. The premise sounded promising:

Tavia Michaels is the sole survivor of the plane crash that killed her parents. When she starts to see strange visions of a boy she’s never spoken with in real life, she begins to suspect that there’s much about her past that she isn’t being told.
Tavia immediately searches for answers, desperate to determine why she feels so drawn to a boy she hardly knows. But when Tavia discovers that the aunt and uncle who took her in after her parents’ death may have actually been responsible for the plane crash that killed them—and that she may have been the true intended victim—she flees for the safety of Camden, Maine, where the boy she sees in her visions instructs her to go.

Now, Tavia is on the run with no one to trust. No one, that is, except for her best friend and longtime crush, Benson.

Tavia feels torn between the boy who mysteriously comes to her at night and the boy who has been by her side every step of the way. But what Tavia doesn’t know is that the world is literally falling apart and that to save it she will have to unite with the boy in her visions. Only problem? To do so would mean rejecting Benson’s love. And that’s the one thing Tavia Michaels swore she’d never do.

Despite the obvious hint of a love triangle, I was eager to see how this book would play out. However, to be frank, it was very disappointing and a huge struggle for me to get through.

There was potential for a good story based on the premise – there was promise of a tense, action-packed and mysterious plot. However, looking back at it after reading the book, the blurb seems to tell the whole of the story – besides the ‘big reveals’  (I use quotation marks because the reveals were not surprising at all), obviously. The story basically consists of Tavia doing three things, until she discovers a secret about her aunt and uncle and she’s so shocked that she runs away with her best-friend-crush-dude, Benson, to a town where another boy might be and told her to go. Unfortunately, everything seemed to be fairly underwhelming. Tavia was meant to be going through tremendous loss and trauma over being in a plane crash, however, the feelings of loss or trauma could not be felt at all, and after a while, it completely disappeared to make way for a new situation. What was even more underwhelming was when Tavia found out a secret about her aunt an uncle – the whole discovery and reveal had absolutely no impact and it looked very much like Tavia was reacting in a  very irrational way – it seemed as though she was overreacting.

The story was also fairly predictable. I could almost guess what would happen next and what Tavia was going to do. The mystery aspect was not executed well and I felt that the plot of Earthbound resembles similarly with the plot of Hush, Hush by Becca Fitzpatrick. A mysterious boy who the main character sees everywhere, to the point where she thinks she might have a creepy stalker on her hands, an undeniable attraction to said-stalker: I’M SORRY BUT I DO NOT HAVE A TOLERANCE FOR THIS. And the love triangle. Oh please don’t get me started on that.

Good love triangles – such as in The Infernal Devices trilogy by Cassandra Clare (praise the heavens for that love triangle) – are hard to come by in books. They’re hard to execute without being annoying. The love triangle in Earthbound was ANNOYING. This mainly had to do with the way Tavia, our main character, dealt with and reacted to her two love interests. The thing is, this was not only a love triangle. It was a love triangle and insta-love duo! Tavia has an instant attraction to the boy she is supposedly having visions about. I found it alright at first, because it was simply a physical attraction. It didn’t last: after two encounters, one of which she actually spoke to him, she started proclaiming love for him. I practically dropped the book right there and then. Despite knowing now why this was so, I still didn’t enjoy it because it lasted for the majority of the novel, unexplained.

The characters – the most vital part to making a novel enjoyable, for me at least – didn’t do it for me. Tavia was extremely inconsistent in her personality. For a girl with a damaged brain and suffering recent trauma and loss over a plane crash that killed everyone in it except herself, she didn’t act anything like it. She was quite hard-headed, and I found her to be quite immature. Her reactions towards certain revelations were very exaggerated. I couldn’t find the heart in me to connect with her or her situation, because I couldn’t identify what her motive was. She was blindly following the whispers of a boy that may or may not be real. I need substance. I need something that will not only push the character forward, but will push me forward with them. And I couldn’t feel that here. Benson was very one-dimensional and flat. He was kind and sweet, but that was basically all that he was. No development of depth whatsoever.

This might just be because it is the first book in a series, but I felt that lots of information was left out and the magical concepts included in Earthbound were not explored or written well. There wasn’t enough explanation as to how it  came to be or why. It was like they were thrown in there on a wisp of an idea and developed from there. Maybe there is better explanation in the next books, however I will never know because I do not plan on continuing with the series. I couldn’t get past the inconsistencies in character personalities, the underwhelming-ness of the plot or the insta-love and love triangle that seemed to take up a lot of the story.

Overall, Earthbound was sadly, a disappointment. It had potential, but ultimately fell short of it. I had to practically push myself to finish it and it was quite a struggle.

Have YOU read Earthbound? If so, what did you think of it?