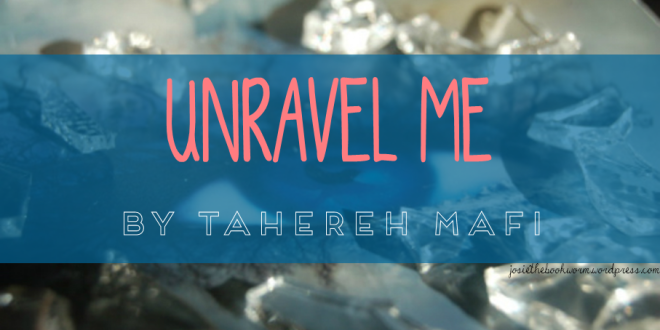 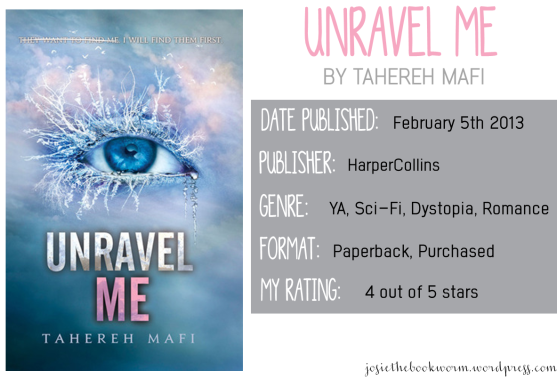 Juliette has escaped to Omega Point. It is a place for people like her—people with gifts—and it is also the headquarters of the rebel resistance.

She’s finally free from The Reestablishment, free from their plan to use her as a weapon, and free to love Adam. But Juliette will never be free from her lethal touch.

Or from Warner, who wants Juliette more than she ever thought possible.

In this exhilarating sequel to Shatter Me, Juliette has to make life-changing decisions between what she wants and what she thinks is right. Decisions that might involve choosing between her heart—and Adam’s life.

Hello bookworms and welcome back! I’m coming to you on this fabulous Friday with a book review of Unravel Me, the sequel to Shatter Me by Tahereh Mafi! She is fast-becoming one of my favourite authors, not just for her amazing writing style but her fabulousness in life – beautiful and stylish, and she has an awesome Instagram! 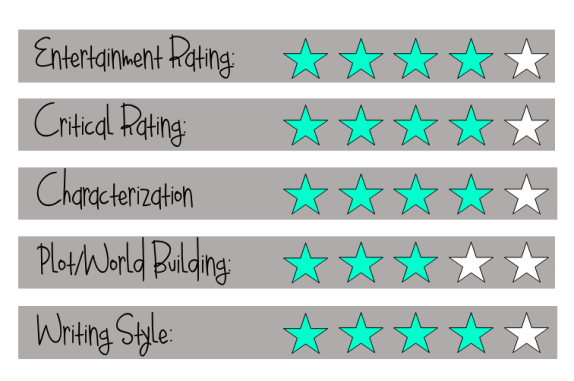 But back to the actual review – Unravel Me was a great sequel to the Shatter Me series. Tahereh Mafi comes at you with a continuation of her unique writing style and an incredible amount of character development, especially in relation to our main character: Juliette. Although it was a great book, I felt this sequel was a little less fast-paced, with a frankly frustrating romance between Adam and Juliette (although this may just be because I have no good feelings towards Adam whatsoever). 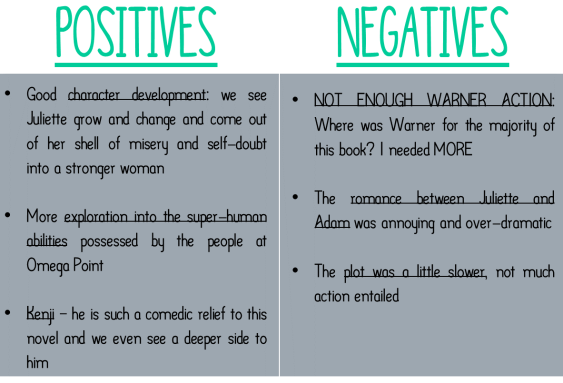 I enjoyed this book immensely. It was engaging and fairly easy and quick to read. I still marvel at how Tahereh Mafi has managed to write a series that I can literally fly through at incredible speeds. The only thing that detracted from my enjoyment of this book was the on-and-off, crazy romance between Adam and Juliette. I never understood it from the start and I still do not understand the intense-ness that the two of them (Adam and Juliette) put into the situation of their relationship.

Before I started this series, almost all the reviews I read about this series mentioned how much character development Juliette goes through and now that I am reading it for myself, I can really see how she develops. In Shatter Me, she was very weak, mentally and physically – she feared herself and held herself back constantly for the power she possessed. However, in Unravel Me, we see her slowly starting to get a little angry, and slowly accept herself. There is much less self-doubt, and with the help of friends such as Kenji, she learns to accept and harness her power.

Speaking of Kenji… can I just say that I absolutely adore Kenji?! In Warner’s absence, I was left with not many people to warm up to, but there Kenji was, to lighten my heart and provide me with some smiles and laughter. I never thought I was be happy to see so much of Kenji within the novel, but I’m so glad for it. In Unravel Me, Tahereh Mafi gives us a deeper glance into his character. He is so much more than simply a source of comic-relief. As Juliette started to develop a closer friendship with him, I found myself also developing a very close attachment to his character. He is by far my favourite character in this novel!

I still don’t understand Adam. Once again, as I said in my review of Shatter Me, Adam seems very one-dimensional to me. It seems his only motivation is his love for Juliette and his desire to be with Juliette. In Unravel Me, I feel like this intensified. All he did was mope around, complaining about how Juliette was hurting him. I mean, COME ON DO YOU REALISE ALL THE CRAP THAT IS HAPPENING AROUND YOU?! AGH. (Okay, tone it down a little Josie)

It was a long wait, but eventually Warner came into the picture. His entrance into the novel was fabulous. It was grand and intense and honestly, he had me swooning! I don’t know if I’ve said this already, but Warner is so complex. As the reader, you don’t know what he is thinking, you don’t know what his true motivations are and you’re kept instantly on edge, just as Juliette is. What I didn’t understand however, was the way Juliette constantly kept blaming and hating on Warner. It seemed a little out of place and always came out of the blue, at the worst moments (in my opinion). But then again, this might just be because I ship Warner and Juliette so hard, especially with the new revelation about Warner and his ability, OH MY GOODNESS.

Compared to Shatter Me, Unravel Me had a slightly slower pace. Although I did finish it quickly, which I attribute to Tahereh Mafi’s fantastic writing style, it felt like there wasn’t actually much happening within the story. It was a lot of prancing around Omega Point, waiting for something to happen, watching Warner’s movements and preparing for a war. And Juliette training. All of these things, however, I felt, were not emphasised enough. I felt there could have been more prominent training scenes showing Juliette harnessing her power, and there was only one scene where they went out on a mission.

However, there was quite a bit of action leading up to the end of the novel. The scenes between Juliette and Warner’s father were great, and it was thrilling to meet the ultimate villain of the story. I must say that I do truly despise him.

It was great to learn more about the superpowers and how the people use them and it was also good to see more of the environment of this dystopian world. However, I’d like to see more, but in spite of everything else, it isn’t a crucial part of the novel.

I think I’ve already indicated a million times in this review, how much I enjoy Tahereh Mafi’s writing style. It’s unique. Okay, that is a very broad statement. Her writing is poetic, slightly frantic as it reflects Juliette’s feelings and thoughts and Mafi is great at writing parts in such a way that you can almost feel what Juliette is feeling at the time.

Overall, Unravel Me is a great sequel to the Shatter Me series, and I am currently reading the final book, Ignite Me, hoping that it will blow me away even more than Unravel Me. Already there is way more Waner action, so I can see a 5 star rating coming up…

Have you read Unravel Me? What did you think of it?

20 thoughts on “Book Chat | Unravel Me by Tahereh Mafi”