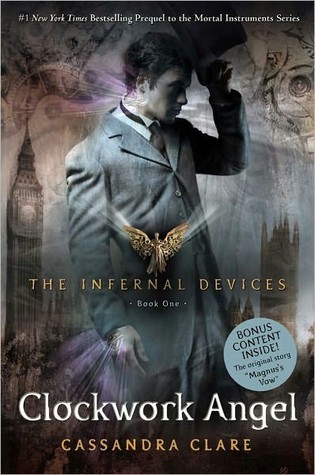 Magic is dangerous; but love is more dangerous still.

In a time when Shadowhunters are barely winning the fight against the forces of darkness, one battle will change the course of history forever. Welcome to the Infernal Devices trilogy, a stunning and dangerous prequel to the New York Times bestselling Mortal Instruments series.

The year is 1878. Tessa Gray descends into London’s dark supernatural underworld in search of her missing brother. She soon discovers that her only allies are the demon-slaying Shadowhunters; including Will and Jem, the mysterious boys she is attracted to. Soon they find themselves up against the Pandemonium Club, a secret organization of vampires, demons, warlocks, and humans.

Equipped with a magical army of unstoppable clockwork creatures, the Club is out to rule the British Empire, and only Tessa and her allies can stop them….

Hello bookworms and welcome back! I am starting off this wonderful week with a review of Cassandra Clare’s amazing first book to The Infernal Devices trilogy, Clockwork Angel. As with all of Cassandra Clare’s books that I have read, Clockwork Angel was absolutely amazing in all aspects. From the moment I started reading, I realised how much I had missed her writing, the way she built her characters and plots.

Clockwork Angel is a brilliantly crafted first book to the Infernal Devices trilogy, a prequel series to the Mortal Instruments series, set in 1800s London. Complete with an amazingly fast-paced and smartly built plot, fantastically developed characters and writing that together make for an addicting and exciting read that will leave you wanting more. At least, it definitely left me wanting more.

As per usual, I will start discussing our characters. There’s a reason why I always start with characters, and that’s because the way characters are built and developed throughout a story usually make or break a book for me. Cassandra Clare is one of the few writers I know and love who always excel in this department. In Clockwork Angel, all the characters has their part to play, their own personalities, struggles, morals and ideas.

Tessa Gray is our main character, a sixteen-year-old girl who recently moved back to London from America, at the call of her brother. Most of the time, sixteen-year-old girl protagonists can be hard to connect with. They can be whiny, a little ridiculous and irrational. But Tessa was a great protagonist. She is exceptionally strong of mind. She’s also very loyal. She is smart and she thinks things over before she does them. In this book, we see her struggle. She struggles of course with the issue of her missing brother, and then also with the discovery that she is not all what she seems. As she delves deeper into this mystery of her brother and also herself, she starts to feel increasingly alienated and different. But she pushes through and shows strength throughout the entire book.

Will Herondale is a Shadowhunter, and appears early on in the book. He reminded me much of Jace from the Mortal Instruments. Does anyone else agree? Will is seventeen, and he is very witty, a skilled shadowhunter and  confident to the point of being quite arrogant. He is quite the trouble maker and comes off as being ignorant to most people. However, all this, he charmed me from the beginning. I like him as a character, and I can see that behind the arrogant and ill-mannered personality, there is something quite troubling inside him that is making him act that way, and I want to find out what it is. Will is a character I quickly grew fond of, however, as of right now, his personality is what is pushing me away from really loving him. Just like Magnus bane said: “There is something dark about the boy, something hidden that was hard to admire.” (Sorry to all those Team Will fans, I’ll get there when I read the next books in the series!)

Jem Carstairs is our other Shadowhunter, the same age as Will and he and Will are parabatai (warrior brothers). He is completely different in personality compared to Will. Unlike Will, Jem is a total gentleman. Just like Will, once I met him in the book, I was charmed. He is so kind and patient and never speaks ill to people. He thinks before he speaks. He is much like the good angel for Will. He is also a skilled fighter. I warmed up to Jem very quickly, the way he handled situations so calmly and his strong respect for everyone. The way he treated Will and Tessa, along with his relationship with Tessa was lovely. He and Tessa got along so well and I loved reading those moments.

All the other characters within Clockwork Angel were amazing too and cannot be forgotten. Charlotte and Henry, the leaders of the Institute are wonderfully written. Charlotte is a strong, female leader. Henry was quite adorable to read, a mechanic that gave some comic relief to the story. Jessamine is another Shadowhunter, that I found to be quite conflicting. She si rude and doesn’t do things when she is meant to, but I think her personality stems from the fact that she was forced into a life she didn’t want. So I don’t know what to think of her. Camille and Magnus Bane. It was great to see their appearance again, from TMI. They are as expected, both amazing characters, and three-dimensional with their own distinct personalities. It was great to see their inclusion. De Quincey, Mortmain, Nathaniel, The Dark Sisters – all greatly written characters that were written as also, three-dimensional.

Right. I think that’s enough for characters. Let’s move on to the plot. It was addicting and fast-paced from the moment the book started. The mystery of who Tessa is, who the Magister is and trying to figure out who he is along with why Tessa is what she is, was wonderful. I couldn’t even guess who the Magister was and once I found out, I literally gasped out loud. Cassandra Clare writes her plots amazingly well and doesn’t fail in writing things that later reveal to hint at the outcome in a jaw-dropping way. There was enough action mixed in with slower parts that all worked together so well. Whenever I put this book down, I wanted to pick it up again. Her building of the Shadowhunter world was simply amazing.

Cassandra Clare’s writing style is one of my favourites. There are very few authors who have a spot up there in my list of favourite author writing styles. I could probably say that her writing is at the top of the list. But don’t quote me on that. Her writing is addictive. It pulls you in and doesn’t let you go. The way she describes things puts images and feelings into your brain and heart. It’s not overly flowery and not overly simplistic either. I love it.

Overall, I think this book was amazing and I am dying for the next book. I am tempted to purchase the e-book right away, but I think I will hold myself off and buy the physical book when I can, in a couple of weeks – because once I get it, I’ll be marathon-ing the entire trilogy (better to give myself a little bit of self-control). This book deserves 5 stars.

Have you read this book? If so, tell me your thoughts. Are you Team Will or Team Jem?

If you haven’t read this book, has this review made you want to pick it up?